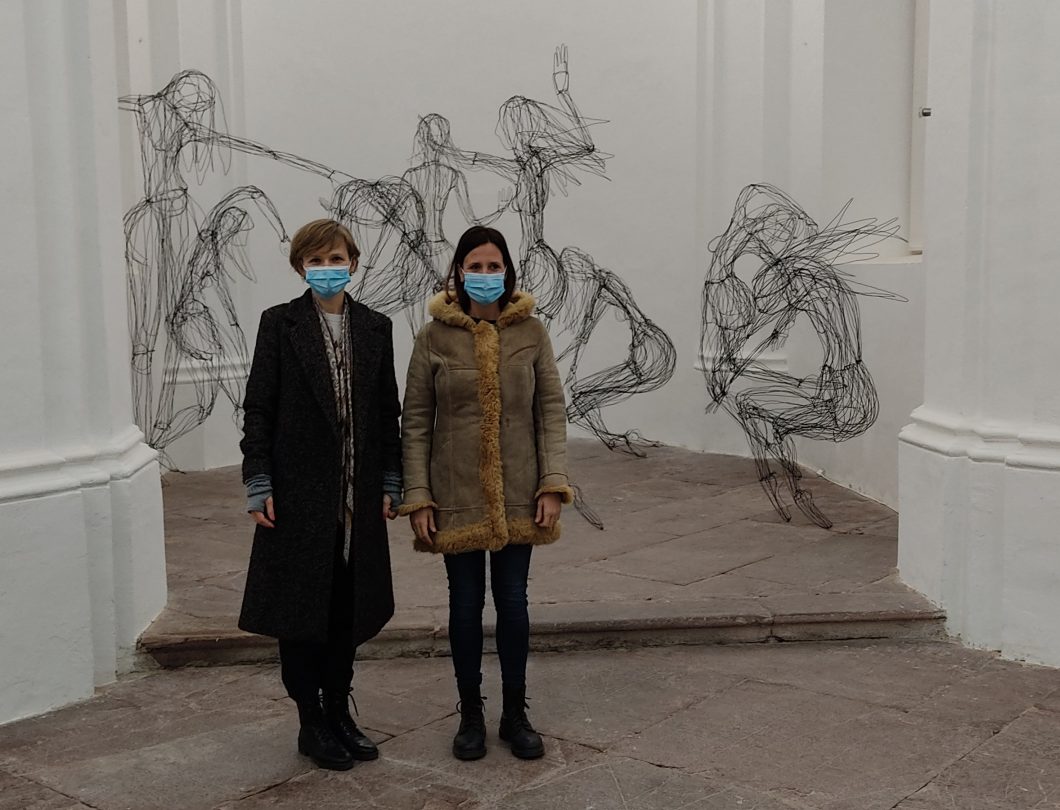 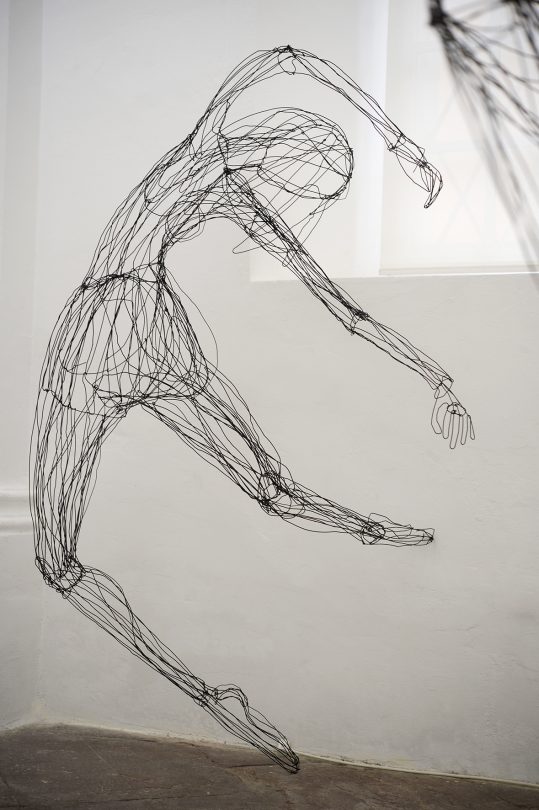 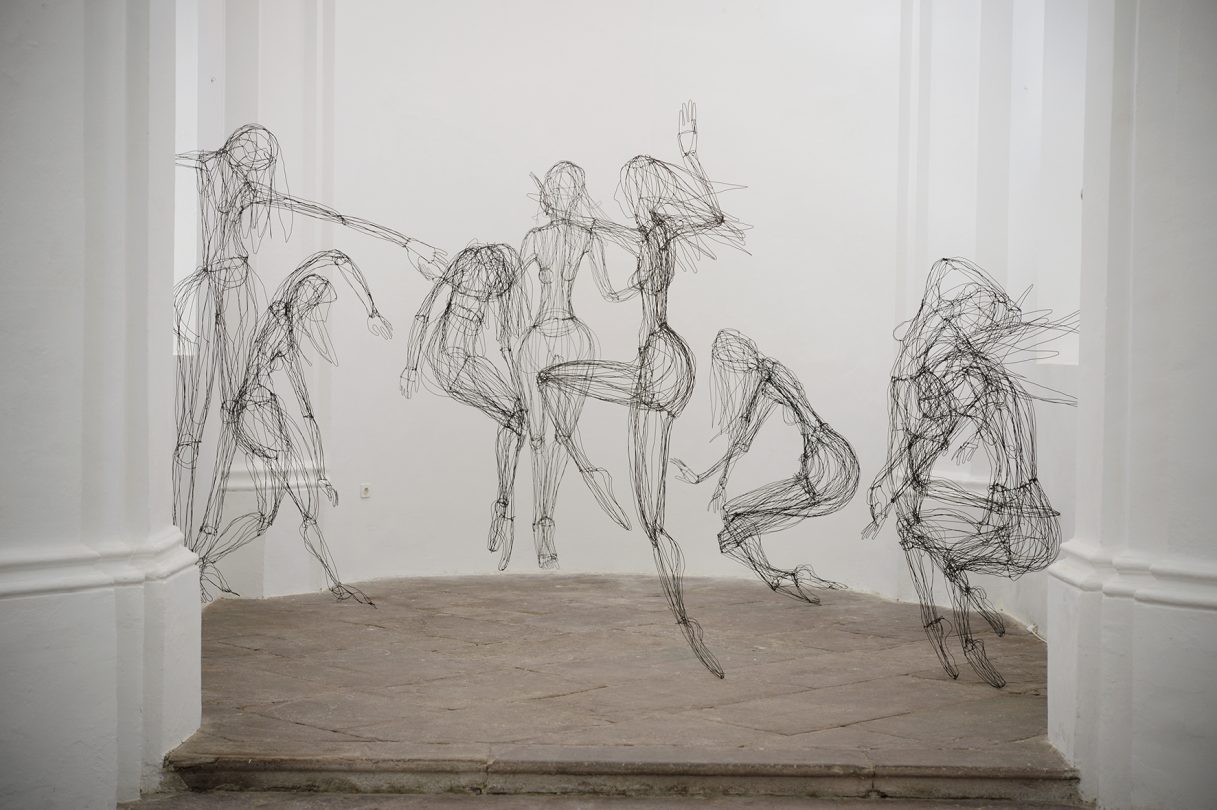 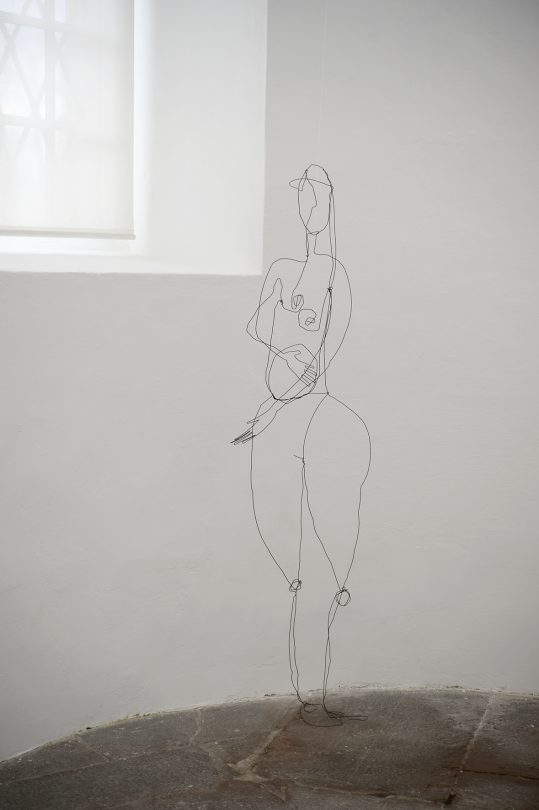 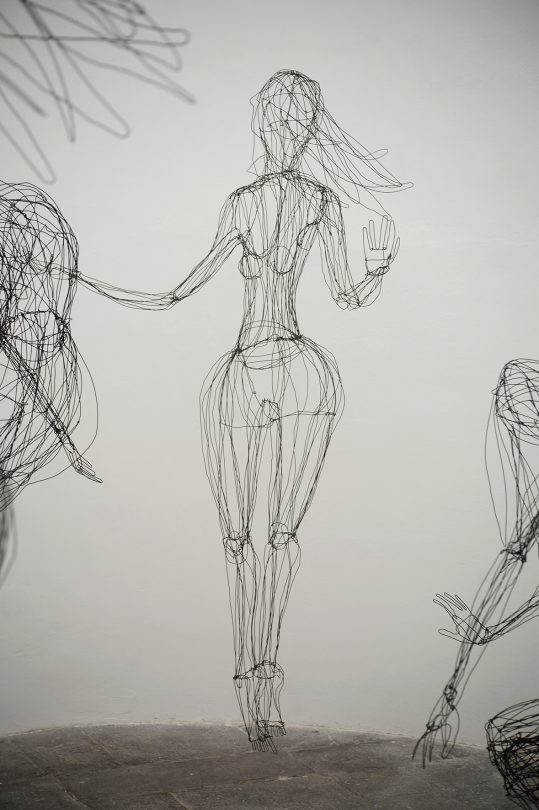 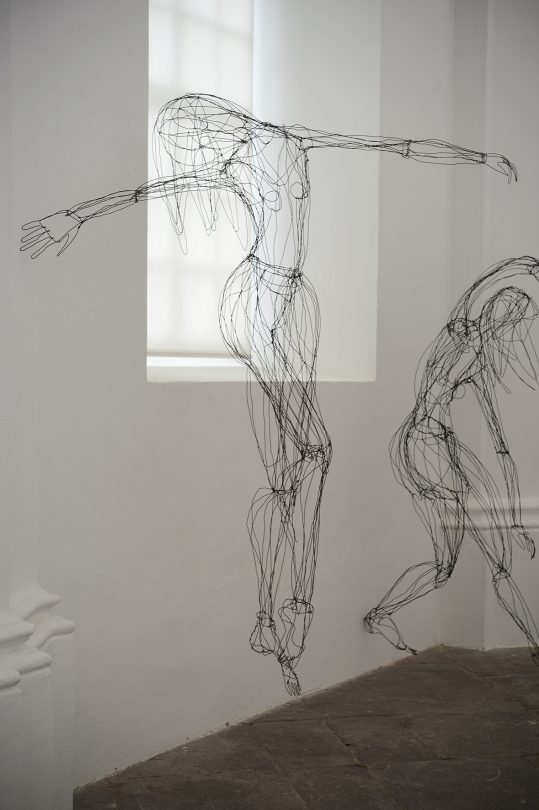 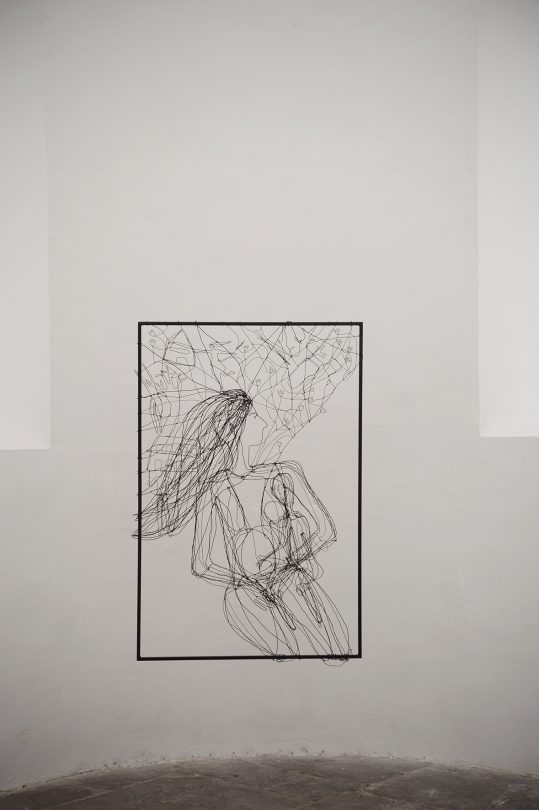 Tea Curk Sorta studied Sculpture at the Academy of Fine Arts and Design in Ljubljana, where she graduated with a bachelor’s degree in 2007 and a master’s degree in 2012. During her studies, she gained further training at the Academy of Fine Arts in Munich. The artist, who is concerned with the role of the individual in the world and in society, has created the spatial installation Transcendences for Krško Gallery, which consists of the series Women, Through Transition and the latest works from the series Self-Portraits.

The sculptor’s work is characterised by wire sculptures that can be seen as three-dimensional spatial drawings as they outline the human body in natural or supernatural size. Based on the attributes drawn, a gender can be assigned to the figures, other information is left to interpretation. The artist says: “[…] we cannot determine their social status, age, nationality, religious or political affiliation. They can be newcomers in a new environment or those who stay.” The basic creative idea of Tea Curk Sorta is the idea of contemporary man and his coexistence with others, which is given a particularly sharp interpretative touch by the prescribed distance and isolation.

The figures in the gallery space are positioned in three interconnected clouds of meaning. In the left apse are five of thirty figures from the series Women. The sculptures in this series have only a slight suggestion of identity. Unlike the figures in the presbytery, their arrangement is not evenly condensed, there is almost no interaction between them. We look at each figure individually and find out how it differs from the previous one. The drawing itself is also less condensed than in the next series, the sculptures are flatter. The artist asks questions about the individual, she is interested in how they are shaped by the present time, which dictates a new ethic of everyday life. The perception of social values has shifted. We vacillate between personal responsibility and the experience of helplessness. Defensively, we retreat into the private sphere and the family. According to Mirjana Ule, these values can be positive for society and the individual and lead to greater individual autonomy, but they can also be negative and lead to anomie (Ule, 2004).

The series Through Transition is installed in the presbytery and for the first time in its entirety. It consists of eight sculptures in the form of human bodies, executed in supernatural size. The figures are placed very close to each other, but there is no physical contact between them. The bodies are frozen in a moment and animated into forms, reminiscent of dance positions. They are caught in a fluid circular movement so that they are intentionally not placed in a proper circle. This apparent movement creates a sense of connectedness between the figures, although they retain their intimate space even within the group. The circular form of the installation strongly connects us to the universal symbol of wholeness, perfection, timelessness and even divinity. It is the opposite of chaos and unpredictability, so engaging with the circular curve triggers a sense of development and growth. Through the rhythmic alternation of beginning and end, the circle stands for an evolutionary transformation process that, as the artist says, “begins within us and only then has an effect on the environment”.

Installed in the right apse is the sculptor’s most recent work from the cycle Self-Portraits. Her own depiction with a child recalls the iconographic scene in which Mary holds the infant Jesus in her arms. In a scene delimited by a frame, as in Gothic illuminated manuscripts or panel paintings (e.g. Martin Schongauer, Madonna in the Rose Garden, 1473), the two protagonists are surrounded by angels and flowers. The present sculptural work is formally executed as a wire relief, which stands out strongly from the frame into the space. It was created at a time of social isolation, in which we withdrew from each other out of solidarity, leading to even greater alienation in an already digitally charged and alienated world, and the growing need for direct human contact.

The artist adapts each exhibition project to a specific space. She explores the relationship between the space and the sculptures, and how the latter affect the viewer. She is interested in how the works manifest themselves in the space, how the viewer moves through the installation and what attitude they take towards her works. In this way, she leads the viewer from the figures that evoke feelings of distance and alienation, to a group connected in a ritual dance, and finally to an intimate image of the most sincere relationship between mother and child. Tea Curk Sorta’s sculpture works are open in terms of content, which means that their meaning is only revealed in the exhibition space and in a specific arrangement that might be different in another exhibition venue. The fusion of exhibition space and artwork gives the exhibition Transcendences a new dimension.